skip to main | skip to sidebar

The Before and After...basic edit

When I began shooting I was a film shooter and so photoshop was really something only few photographers used and was accually popular for restoring old photographs.
Now I think many photographers have many images running through photoshop in their edit process. And why not??? Just check out the basic tweak of a simple image taken on a overcast gray day.

The first image is straight from the memory card. Shot at about 400iso and apature priority f13 and 1/100sec.

My first step to edit this image is to adjust the contrast.
Second....my writing in the sand is not quite showing up as dark as I'd hope to accually know it is there so I am going to use a brush and I am going to adjust the opacity a little and I am going to highlight their names in the sand.
Lastly, I added the sky. It's not something I generally do~but I really wanted something that looked good and my sky moved south and it was so blah i wanted to bump up the image a little but not over the top...but just enough to get a second glance. 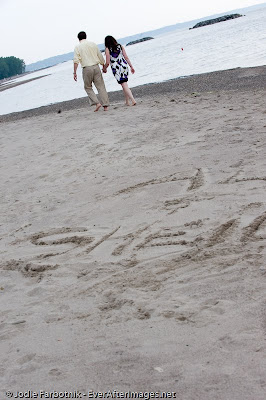 I like the final image. It has good contrast with darks and lights and good use of space.
I would like to hear your thoughts. Too Much~too little...just right? 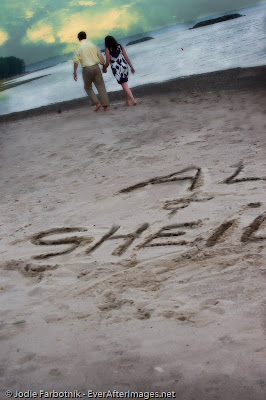 Here it is...Please come see my blog at www.everafter-erieweddings.com At this blog you will see current weddings, stories and photography specials. Also THIS blog you are following is going to be a "how'd you do that" kinda spot. It will highlight locations of photography sessions. Vendors that contributed to the event, as well as a few posings and tricks and tips to get the expession from families and couples that work for me.

p.s. I have a fantastic couples special I plan to announce very soon!!
Posted by Ever After Blog at 9:11 AM 5 comments:

Welcome to My Ever After Blog